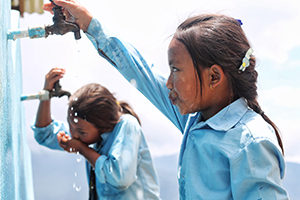 In the rural Nepalese district of Sindupalchowk, the Kathmandu Environmental Education Project (K.E.E.P.) conducted a clean-water project called ‘Drinking Water, Sanitation, and Health (WASH) in partnership with BridgIT Water Foundation, Australia. This project was implemented in the villages of Baruwa and Lagarche, with the aim of addressing one of the eight United Nation’s Millennium Development Goals (MDGs) in a bid to increase access to clean water for all.

Nepal is one of the 10 poorest countries in the world. Villagers living in rural areas represent some of the most vulnerable and disadvantaged groups globally. Only 31% of Nepal has sanitation coverage, leading to widespread open defecation. Approximately a third of all deaths in Nepal are of children under five years old, and half of these are due to diarrhea. Water supplies are often polluted and water-borne diseases are common.

The objectives of this project were to provide infrastructure development for sustainable water sanitation as well as safe drinking water to the 80 households of the two villages and their schools (481 students). WASH has supplied clean and perennial water to schools and communities through the development of innovative infrastructure like water storage tanks, which had to be transported along with all materials from the city to the remote villages, water pipelines had to be dug through the village

The holistic, innovative approach of this project not only focused on structural development, but also on health improvement, human development, and sustainability. It was essential, therefore, for K.E.E.P not only to build infrastructure but to educate the local community. Workshops to educate communities and school kids about hygiene and sanitation were hosted. A local water committee was set up with a seed fund and the communities have ongoing support from K.E.E.P.

We are an enthusiastic supporter of the Energy Globe Awards and its aim to strengthen society’s awareness of the necessity for ecological change, by honoring outstanding best practice projects in environmental sustainability from all parts of the world. ADVANTAGE AUSTRIA is the official Trade Promotion Organisation (TPO) of the Republic of Austria and as a country, we are proud of our success in green technologies. Our support of the Energy Globe Awards continues this tradition.

A registered non-profit non-governmental organization, Kathmandu Environment Education Project (KEEP) has the mission of ensuring the future ecological and cultural prosperity of Nepal and its people by maximizing the benefits.